These days, we have all realized the importance of food health in maintaining our physical and mental health during this hectic and industrial life, and we have realized that the root of many dangerous diseases lies in the “unhealthy” nature of the food we eat.
Scientists and medical researchers have concluded in recent years that in order to ensure the health of food, not only the quality and type of raw materials are important, but also one of the important causes of various diseases in the body, some kitchen utensils.
These dishes alone can poison cooked food, or in the long run, can cause various diseases in the body due to the removal of the veneer or the combination of the container with the food. On the other hand, the health of cooking utensils is much more important in cooking children’s food, because children’s bodies show more sensitivity to food contamination as they grow older.
For years, researchers have been looking for a special formula for making dishes that have no coating, color, glaze or even Teflon without any effect on the quality of cooked food. Containers that can be extended even when washed with dishwashing wire and are very economical in terms of durability and shelf life (more than 10 years). The researchers used a successful experiment to build the fuselage: the hard anodizing process.
Around 1940, the United States used anodized hard drive technology on aircraft parts and components, and in 1987 to prevent the use of aluminum and polymer coatings such as Teflon in kitchen utensils, the industry in Kitchen utensils were used.
Hard-anode containers do not have any layers or coatings, do not change the taste of food, and do not return harmful substances to the food. The first place is economical, because the life of Anadiz hard drive containers is more than ten years, and during this time they do not need to be rebuilt and repaired.
Due to the uniform and rapid transfer of heat, the energy reaching the container is not wasted in any way through the gas flame, and the thermal efficiency is 3 times higher than the common dishes on the market, so there is no need to use a large flame for cooking and cooking. It is not cooked and can be easily cooked using a third of the flame compared to conventional dishes, but with the same duration.
It is for these reasons that the containers produced with this technology have been approved by the German Chamber of Commerce and Industry of Munich, the Iranian Scientific and Industrial Research Organization, the National Standards Organization, the Society of Inventors and Innovators, and the British National Standards Organization. 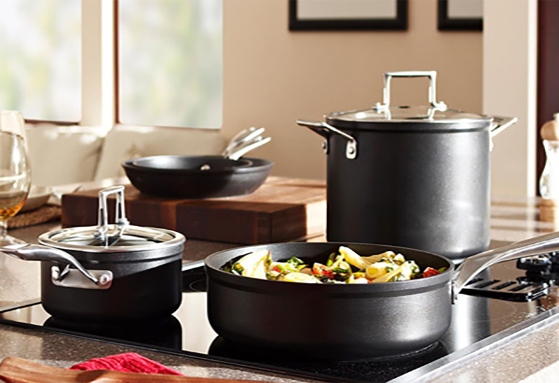 The history of hard anodized containers began when the advanced world discovered the harmfulness of polymers as a coating used in aluminum containers and used the technology of the aerospace industry to produce completely hygienic kitchen utensils. Thus, during the highly advanced process of hard anodizing, by creating a hard oxidation on the aluminum surface, its hardness reaches its highest degree and its thermal resistance increases to such an extent that it is not easily damaged even by a hard object.
_

Health: These dishes are made with the latest technology in the world and nothing has been used as a coating or paint to remove them with abrasion. This is the metal itself, which has reached the highest degree of hardness in a very advanced process and is important. In addition, unlike ordinary aluminum containers, it prevents the release of ions and the dissolution of metal in food.

Durability: By creating hard oxidation on the aluminum surface, its hardness reaches its highest degree and the thermal resistance of its surface is increased up to 1250 degrees Celsius, so that even with all kinds of hard objects, it is not easily damaged and resistant to heat. Top without water and oil, its characteristics do not change.

Taste of food: Due to the lack of coating, the taste of food does not change and does not return harmful substances, and the uniform transfer of heat in the surface oxidation caused the delicious taste of food and maintaining the quality and freshness of food.

Non-stickware: All you have to do is heat the pan first, then pour in the butter or oil, lower the flame, and then pour the food into the pan. Your container will simply not stick. Even cooked rice or the bottom of a roasting pot can only be easily removed by cooling the bottom of the pot and separating the rice from around the pot with a knife (like a cake).

Long service life: This container is more than ten years old and does not need to be repaired or repaired.
Fuel saving: Its material triples the heat to the container, and with complete and uniform heat transfer, there is no need to use a large flame for cooking, and it is easier to use a third of the flame than conventional containers with duration. Cook the same amount of food. 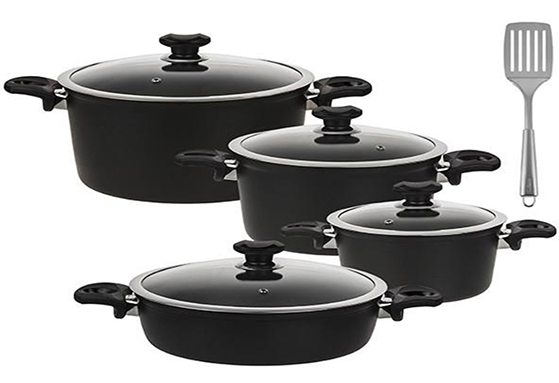 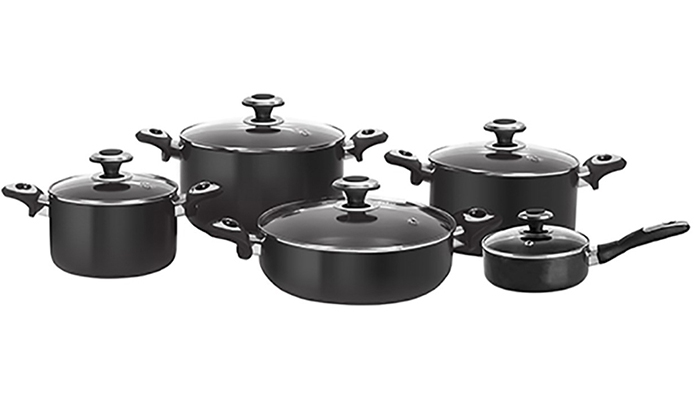 1- Before use, wash the dish thoroughly with warm water, dishwashing liquid and dishwashing wire or scotch tape.
2- Because these dishes are anti-scratch, you can also use metal and steel spoons and spatulas during cooking. (For hygiene)
3- Before pouring oil or butter, heat the dish so that it finds the best non-stick state.
4 – After heating the pan or pot, reduce the flame to save fuel consumption.
5- Never boil vinegar alone in a container. But pickles as a spice will not harm the dishes.
6- When cooking with these dishes, acidic substances such as lemon juice, vinegar, paste, etc. should be added to food at the end of cooking.
This type of container prevents Alzheimer’s disease, which is caused by the use of aluminum containers, due to preventing the penetration or dissolution of aluminum metal in the food. 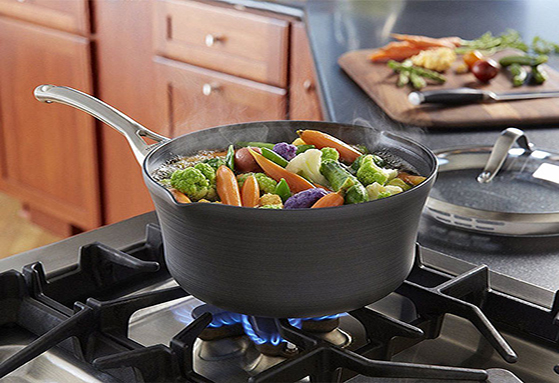